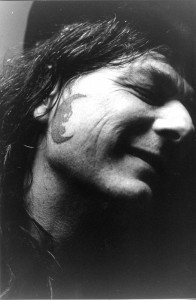 Oregon's and the world's music scene was dealt a major blow with the loss of one of it's most revered members.  Fred Cole, who had a 50+ year music career filled with the raging guitar and primal howl that for many of us was the epitome of great rock-n-roll.
A DIY pioneer who would start to record and cut his own bands' records (and for many others) completely outside of music industry influence or trends, always remained true to his audio-vision.  And that extended outside of the music as well. Along with his musical and personal lifetime partner Toody Cole, they set a example of authenticity for those to follow both on and off stage.
Recently their most well known band Dead Moon, was officially recognized by the City Of Portland declaring that October 5th 2017 was "Dead Moon Night" in observence of their numerous contributions and standard setting.
One of Fred & Toody's prior bands The Rats were a staple of my first program at KBVR in Corvallis, and after arriving at KBOO I was honored to host them here with Dead Moon, The Pierced Arrows, the very limited The Rats reunion and as an acoustic duo. Normally I would tributize someone with their recorded music. But KBOO already aired two tremendous super well-informed Fred Cole specials. One hosted by Cole Discographer Eric Isaacson of Mississippi Records along with likely the world's biggest collector of Cole related music and artifacts Jay "DJ HWY 7" Martin and our own Program Director and Cole-Fanatic Erin Yanke (who did both) :

Also Jay and well-known Portland musician Sean "The GhostTrain" Croghan have their own internet radio program called "Facing The Music" on houseofsound.org, and did a two-hour tribute here:
http://houseofsound.org/programs/67

Also a few programs back on "Dead Moon Night Eve" 10/04/2017 I played about a hour of Dead Moon in celebration:

Plus I heard several tributes on another Portland non-commercial station the X-Ray on Nov. 10th and 11th. They also archive their programs:
https://xray.fm/
And there's more radio and internet tributes from all around the world, because no matter where they went, they made more than friends,...they made new family.
So instead of doing the same, for tonight's DFP I reached out to any available performers from the City Of Portlands' Dead Moon Night, as well as others to stop by and play Fred Cole covers for us live-on-air. Confirmed as of this writing are The Ransom with guest vocalist Jerry A. of Poison Idea, Little Sue, The Lucky Thirteens, Magick Gardens, Lewi Longmire, Dr. Amazon and hopefully some more to come...

Update Required To play the media you will need to either update your browser to a recent version or update your Flash plugin.
Topic tags:
Music
Genre(s):
Eclectic, Live Performance, Punk, Rock and Roll