The Pynnacles to perform live on Drinking From Puddles: 09/07/16 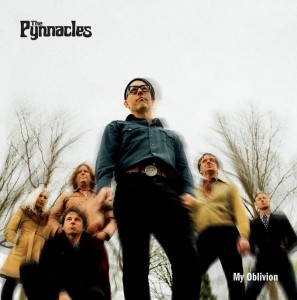 Portland stage-party-royalty The Pynnacles come in for a Live session previous to their release party, and K Records King Calvin Johnson may call about his new Selector Dub Narcotic LP and PDX show!

With members of Satan’s Pilgrims, Big Elf, Paradise and Crackerbash, The Pynnacles are immersed in Portland music history (as well as this programs'--Scott and Sean Pynnacle were in the first local band to perform on the show, back when it was called "Love City"), Crackerbash, back in 1990.

Drawing inspiration from (and sometimes covering) mid-sixties garage punk, The Pynnacles are steeped in the retro sound of those bands, but bring a modern attack informed by the decades since that raises The Pynnacles from mere revial to full-on revoultion! The members may have more countable rings in their trunks than most of the current hordes of bands that scrape for PDX stage time, but you'd never know it by attending one of their performances...The Pynnacles out-play, out-jump, out-joust and out-rock any preconcieved notions about musicians and age.

Listen to this radio-teaser to their upcoming release party Friday 09/09/16 at the World Famous Kenton Club !

Also on this program Calvin Johnson (of K Records/Beat Happening/Halo Benders/Calvin Johnson etc..) may call-in to talk about his latest effort under the Selector Dub Narcotic moniker "This Party Is Just Getting Started" and Portland release soiree Fri. Sept 16 at Disjecta