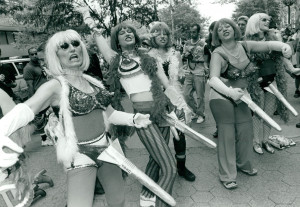 Turning Red: The new animated film, Turning Red, is the first film in decades of Pixar productions that was created by a female director, as well as by a primarily female artistic team. Chinese-Canadian filmmaker, Domee Shi (Dough-may Shee), directed the film, as well as writing the screenplay along with Julia Cho. Set in the Chinatown of Toronto where Shee grew up, Turning Red is a coming of age story that unfolds around intergenerational relationships of girls and women. In their Movie Mole review, Joe Clement and Jan Haaken look at Turning Red through a feminist lens and they talk about how the film takes up psychological aspects of girlhood.

Reproductive Justice: Sharon Grant reads excerpts from “How Black Feminists Defined Abortion Rights,” by Keeanga-Yamahtta Taylor, printed in the February 22, 2022 issue of the New Yorker Magazine. As liberation movements bloomed, they offered a vision of reproductive justice that was about equality, not just “choice”.

Black Cake: In celebration of Women’s History month, treat yourself to a sprawling historical novel, Black Cake, by American author Charmaine Wilkerson, who has lived in Jamaica and is based in Italy. Book Mole Larry Bowlden reviews the novel about a complex Jamaican family, told from the point of view of multiple narrators.

Media Spin on the War: Bill Resnick interviews Jeff Cohen comparing U. S. media coverage of the Russian invasion of Ukraine to the U.S. invasion of Iraq. For example, the suffering and deaths of Ukrainians are shown in heartbreaking detail, while in Iraq, as Cohen witnessed himself as a war reporter, civilian deaths were largely ignored and undercounted through the years. Cohen was founding director of the Park Center for independent Media at Ithaca College. He is the author of Cable News Confidential: My Misadventures in Corporate Media.

Nuclear Disarmament Now: Well-read red Bill Resnick reads from an article by Norman Solomon titled “Now Is the Time for a Global Movement Demanding Nuclear De-escalation” first published on the website Truthout on March 3, 2022. Norman warns that the two imperial powers, the U.S. and Russia, are taking us to the brink of nuclear war and calls for a revived international peace movement. Bill comments on the article contending that the two imperialisms have different goals: Russia’s is primarily defensive, looking to a multi-polar world. The U.S. is seeking world supremacy which has already led to conflict with a nuclear-armed China. Solomon is a KBOO alumnus, a syndicated columnist who co-founded founded the Institute for Public Accuracy and founded the organization Roots Action.