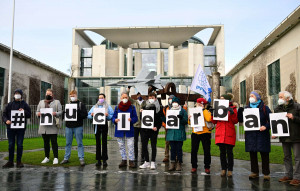 Well-read red Bill Resnick reads from an article by Norman Solomon titled “Now Is the Time for a Global Movement Demanding Nuclear De-escalation” first published on the website Truthout on March 3, 2022. Norman warns that the two imperial powers, the U.S. and Russia, are taking us to the brink of nuclear war and calls for a revived international peace movement. Bill comments on the article contending that the two imperialisms have different goals: Russia’s is primarily defensive, looking to a multi-polar world. The U.S. is seeking world supremacy which has already led to conflict with a nuclear-armed China. Solomon is a KBOO alumnus, a syndicated columnist who co-founded founded the Institute for Public Accuracy and founded the organization Roots Action.

Update Required To play the media you will need to either update your browser to a recent version or update your Flash plugin.
Download audio file
Topic tags:
Government/Politics, War/Peace