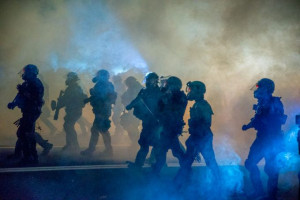 Portland Police on the 100th Night of BLM Protest: Photo by Bette Lee (see below)

The Abuse of Outer Space: Bill Resnick interviews Bruce Gagnon, co-founder and coordinator of the Global Network Against Weapons and Nuclear Power in Space, that seeks to protect space from the predators and militaries. They discuss the many abuses of outer space now taking place or planned:

Abuse #1: theatre of the absurd, we’ve seen it on TV the last several weeks, two of the three competing boy billionaires rocketing off into space to get a glimpse of the earth before returning to this spoiled planet, to display themselves as visionaries and heroic pioneers, and maybe make some extra bucks out of adventure tourism.

Abuse #2: space is now an arena of conflict with the U.S. military seeking to maintain dominance but the pesky Chinese and maybe the Russians challenging them. Mass surveillance is one major function.

Abuse # 3: all these uses/abuses create space junk and pollution, like what’s happening to our oceans, with potentially great but still unknown consequences for life on this planet.

Bill and Bruce also discuss what must be done.

Union-busting at Voodoo Doughnuts: When the fatal heatwave hit Portland over a month ago, workers at Voodoo Doughnuts walked off the job when indoor temperatures soared into the 90s with no air conditioning. Several were fired. Joe Clement talks with a Doughnut Workers United rank-and-file organizer about a picket protesting these illegal firings and other union busting activities at the Old Town Voodoo Doughnuts, SW 3rd off Burnside on 7/29 at 6pm. Further details on the Facebook event-page.

Ni:mi:pu: and Radical Resistance: Mole Julian Ankney interviews Beth Piatote, a Ni:mi:pu: (Nez Perce) Professor of Native American Studies at Berkeley, about literature and fiction as acts of radical resistance, healing and hope for our future. A scholar of Native American/Indigenous literature and law; a creative writer of fiction, poetry, plays, and essays; and a member of Chief Joseph's Tribe and the Colville Confederated Tribes, Professor Piatote is an Indigenous language revitalization activist/healer, specializing in Nez Perce language and literature. She is the author of two books: Domestic Subjects: Gender, Citizenship, and Law in Native American Literature (Yale 2013), which won an MLA award; and The Beadworkers: Stories (Counterpoint 2019), which was longlisted for the Aspen Words Literary Prize, the PEN/Bingham Prize for Debut Fiction, and shortlisted for the California Independent Booksellers Association “Golden Poppy” Award.

Dispatch from Venezuela: Luisa Martinez reports on her recent stay in Venezuela. In particular, she takes up the consequences of the US blockade of resources and its implications for how we understand and relate to the Venezuelan socialist project. In the midst of hard living conditions, she found excitement, liveliness and hope. Norm Diamond adds a brief commentary.

If you’ve been to a protest during the past three decades, you’ve probably seen her, the short, slight woman behind the camera, always in the thick of things, documenting the resistance that Portland is famous for. From the 1989 march to condemn the racist murder of Mulegeta Seraw to OccupyPDX in 2011; from the 1991 protest against the first Gulf War to sHell No! the successful blockade in 2015 of Shell Oil’s icebreaker bound for the drilling fields in the Arctic; from the 2000 May Day police riot against peaceful demonstrators to 100 Days of BLM protests in 2020, Bette Lee has been there to create images from an activist point of view.

The Old Mole is pleased to present a retrospective of Bette’s work, kicking off with an interview of the activist with a camera on August 9. Every week after that we’ll post a new photo documenting Portland’s protest history and linking past actions with ongoing organizing and resistance.

Here is Bette Lee’s reflection on her photograph above of Portland Police on the 100th night of Black Lives Matter protests:

Portland became one of the main flashpoints of resistance during the BLM protests last summer which involved intense confrontations and police attacks. According to the DOJ, police arrested 1000 people, and used force over 6000 times. For over 100 consecutive nights, police pounded BLM protestors with tear gas, pepper spray, stun grenades, rubber bullets and impact munitions.  Many people suffered injuries, and law suits were filed against the excessive use of tear gas and police violence. This protest on Sept. 5, 2020 to mark 100 nights of resistance in Portland was no different. The police set up a road block on Stark and 113th Street, declaring the march an “unlawful assembly.” About 400 protestors refused to comply with the police order to disperse, setting off fireworks and 3 Molotov cocktails, which set a man’s pants of fire. Several protestors rushed to put out the fire, preventing any serious injury. The police declared a riot, and wasted no time in charging at the protestors, firing rounds of tear gas and stun grenades. About 59 protestors were arrested.