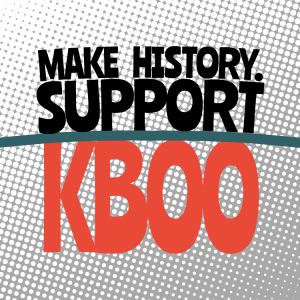 You are the person who makes the difference!

Now it is time to continue the legacy and look ahead to the next fifty years!

Here are some of the special programs we have planned for this drive:

Produced for:  The Sacred Circle "TEMENOS"

Exploring cannabis culture with words and music all night long . . .   And in case you didn't know:   50 years ago back in 1968 when this station was born, KBOO's call letters were selected based on a popular marijuana strain called "Berkeley Boo".       ...Read more

The Reluctant Radical on Positively Revolting

Ken Ward is a climate activist.  To try to stop destructive practices that advance climate change, Ken engaged in planned acts of civil disobediance. The Reluctant Radical is a film about Ken's action to help fulfill what he sees as his duty to future generations.  The fil...Read more

March for Our Lives Corvallis was a gun violence protest that took place in Corvallis on Saturday March 24, 2018, along with over 800 demonstrations worldwide, including the focal march which took place in Washington DC.  These events were a call for an end to gun violence ...Read more

The Plot That Killed the Dream...A penetrating look into the forces behind the assassination of Dr. Martin Luther King. Easily dispels the falsehood that James Earl Ray murdered Dr. King, and instead follows the evidence and sworn testimony from the shooter to the organi...Read more

Produced for:  Movin' On

Joe Hickerson will tell stories of folk music history, and if we're lucky he will play us a few songs. Get ready for the Columbia Riverkeeper's Annual Pete Seeger Celebration! A fun and family-friendly celebration of resistance and song and storytelling led by folk hero Joe...Read more

Do You Love Me?

Produced for:  Roots of Rock and Roll

Produced for:  Bread and Roses

Q Center’s Executive Director, Óscar Guerra-Vera is a child of Tepehuan (O’dami) indigenous immigrant parents. She was born in Southeast Los Angeles and raised in the Pacific Northwest, mainly in Beaverton, Eugene and Portland, Oregon, as well as Seattle, Washington.

Occupation has a corrosive and corrupting effect not just on the occupied but on the occupiers as well. The British learned this in Kenya as the French did in Algeria and maybe the U.S. did in Iraq. People don’t like to be occupied. Thus, severe measures are employed to ...Read more

Produced for:  Stage and Studio

Eric Bartels interviews Becky Clark, president of the Oregon Potters Association, the collective behind the 36th annual Ceramic Showcase, which opens Friday, April 27th at the Oregon Convention Center. The OPA says the three-day event, which features the work of over 150...Read more

Ehrenreich has done it again! The author of "Nickel and Dimed," "Bright-Sided" and many others now offers us her fresh and unique take on the medical establishment, the "wellness industry," and our peculiar attidudes to death and dying. Her prose is as always succinct...Read more

Joint Theresa Mitchell as she welcomes investigative journalist Greg Palast to Presswatch during KBOO's Spring Membership Drive.  Call (877)500-KBOO to pledge your support and get a copy of Greg's book and film The Best Democracy Money Can Buy.  Palast with ACLU Kansas ...Read more

Ani & Lyn welcome Portland author Alexander Reid Ross to discuss his book Against the Facist Creep and the ongoing efforts of right wing extremists to co-opt social movements. As the election of Donald Trump shows, fascism in all its white nationalist and “alt-right” pe...Read more

Cecil and Celeste welcome Alford A. Young to KBOO to discuss his new book Are Black Men Doomed? during KBOO's Spring Membership Drive.  Call (877) 500-KBOO to pledge your support and get a copy of the book. Life for too many African American men is a battle with extreme ...