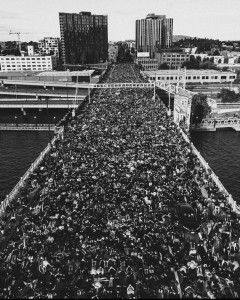 Bill Resnick talks with Greg McKelvey and reflects on policing and on the protests locally and nationally.

A Discussion of Radical Police Reform with Trevor Noah, Patrice Cullors, Alex Vitale and others

Lessons for Creating Safety without the Police from SOS

Hi folks, Bill Resnick here for the old Mole, with thoughts about the George Floyd protests here and around the country.   And where this struggle for control of the police is heading, and What should be the means toward what ends. Recently I’ve talked to Greg McKelvey an early leader of Black Lives Matter, a co-founder of Portland Resistance that’s been active in the Floyd protests here as well as in the Police Reform Network here in Portland that is supporting a program of vast change in the police union contract with the city. That contract’s now being negotiated. The Network is providing great community support for the several city commissioners who are fighting for those contract changes. Which contract must go beyond the great victories just won before the city council, the partial defunding of police and creation of alternatives to the police as to school police, and dealing with the homeless, and maybe dealing with mental health emergencies

And also, wonder of wonders, we Portlanders just elected a new District Attorney who not only promised a reform agenda but has fought for it in the past, including with alternatives to incarceration for drug crimes.

Also today I’ll be summarizing the findings of quite a few interviews I’ve done over the years on police abolition and alternatives.

First I interviewed Greg McKelvey about a week ago on the uprising in Portland following the murder of George Floyd. Here are some excerpts.

So Greg McKelvey, give us your evaluation of what’s happened in the city. Are the protests tapering off now? Or are we moving into another phase?

I think we’re definitely moving into another phase, but I wouldn’t characterize it as tapering off. I know that there are lots of different protests popping up around different parts of the city. I know there’s neighborhood protests going on and neighborhood family marches. We’re seeing marches in Clackamas, in Lake Oswego, in Washington County, Beaverton. So, all of those things give people more opportunity to go to different things, which of course would then siphon off a few people from the larger crowd. But, even just going around the city, you see a lot of people with signs, just homemade in their cars for everybody to see.  You see a lot of people just holding signs on the sidewalk. So, I would say that maybe, you know, the main protests might have a few less people, but that the uprising is still continuing and I think will continue into a phase where people are demanding local action. We’ve already seen the school resource officers be pulled from schools and that happened after just a week, and so, you know, who can say what can happen in the time span of let’s say a month.

Bill: We recorded that over a week ago. Since then we ‘ve seen the protests multiply across the country and world, and they  haven’t changed much in that they’re almost entirely young people. One of my friends, a woman of 56, said in her protest group she didn’t see anyone near her age. But the protests have changed a good deal, in that they’ve widened their critique and demands, and indeed achieved a great success in Portland in partially defunding the police -- more on that later in this piece.

Getting back to Greg, I asked him, Greg, one very important thing hasn’t changed, the multiracial character of protests and the youthfulness of the protestors. It seems to me that the protests, of course directed against police violence, but it seems to me there’s a background of growing anger and critique from young people about inequality, lack of living wage jobs, and out of control climate change that could devastate their lives. And all this as the rich keep getting richer. This anger and fear and demands for change, they seem to have erupted during the protests. This could be the sign of a long lasting rebellion

That’s absolutely true. I mean, we have sort of a powder keg in this country that was just ready to ignite with the pandemic occurring and lots of people experiencing economic insecurity, worried about how they’re going to pay rent, if they’re going to be evicted. Then you have young people that are incredibly worried about the future of the planet. And we have a president that inflames all racial tensions and in an incredibly polarized country, that along with alt-right groups that have been invading our city for a long time, I think the entire country really was ripe for this. And so, I think the timing really does contribute to the size of the uprising.

Hi Folks, This is K   B    O   O Radio, Radio, Portland, OR. Bill Resnick for the Old Mole Variety Hour on the last near three weeks of an uprising after the murder of George Floyd. You just heard riffs from the song Please Mr. Policeman by a whole set of groups and the singer Laurice.  We’ve heard so far parts of an interview with Greg McKelvey done near a week ago pointing to the vast size and duration of the protests, in fact it’s fast growing across the U.S. and the world and especially among the young. And while the protests remained true to their initial impetus, challenging police violence, racism and exploitation of people of color, this uprising it also, creating fear in national elites, came to express the anger among the young and many of us others about economic inequality, lack of affordable housing, and numbing precariousness here and growing all around the word as the rich get richer and devastate planetary ecosystems.

In the concluding segment of this piece I’m going to try to present the radical program about what must be done about police violence, that based on my reading and my interviews over the years with many folks including Alex Vitale who wrote the book The End of Policing, Kristian Williams who wrote Our Enemies in Blue, Malik Miah the Black revolutionary activist too, also Greg McKelvey and Teresa Raiford of Don’t Shoot Portland. All these have addressed police violence and how to end it and create a society in which all can contribute and live in dignity.

First,  What Can be done about Police Violence, What works. It’s Not the usual stuff: police cameras don’t seem to make a difference.  Nor does training in community relations and training in tension reduction and cooling people down. Nor does antiracism training.   Nor do civilian review boards help much when they are weak and have no control of police behavior or discipline.  None appear to reduce targeting and severe violence to Blacks.

What then does seem to work, to some extent:  It is making the police accountable which starts with the local District Attorney. Having a DA that prosecutes illegitimate violence by the police, indeed throughout the criminal “justice system, that’s crucial.

Also police violence seems to be considerably reduced when policies on the use of force are tightened up and enforced by the police themselves and by the DAs.

Next there’s the police contract, it must permit accountability: After a shooting or any use of extreme violence, the police involved  must be immediately interviewed, not as today in many police contracts, including in Portland, two or more days afterwards in which time the police on the scene with the police union lawyers collaborate to create their story. The dead man was always reaching for a gun.

In addition civilian review boards can have some effect if they have official support and subpoena power.  And police discipline files must include all complaints with particulars of the complaint and the outcome, and must be subject to public record inspection, with of course some restrictions to protect privacy.

If these accountability measures are in place, then police cameras, and anti-racism and community relations training, and training in defusing conflict can have positive impact.

In addition of course all critical observers emphasize radically reducing police numbers, defining much more narrowly police responsibilities and simultaneously building up social services that deal humanely with public safety problems. We know that many programs can work:  in dealing with drug use and harm reduction, in rehabilitation, in    decarceration including drug courts, in dealing with mental health emergencies, domestic violence, and child protection, in mental health emergencies, in houselessness, and in maintaining decent order in the schools where police have been increasingly involved. Last week Thursday in a Portland City Council budget hearing led to a Council decision, over a hundred people testified over Zoom demanding a partial defunding of police and use of the monies on helping services. The Council agreed, they reduced police budget and set aside some monies. That’s a start and the movements that spearheaded it will surely continue.

And still to be decided are issues of police militarization, seeing the local population as the enemy, with the police becoming an occupying army.

In the end of course none of this will succeed, even all together, nothing will succeed if the US remains so unequal, so precarious, with so many people driven to desperation and despair and others to illegal ways of making a living, with so many people living on the streets, so many hungry children, in a world whose food and other production could collapse if global roasting continues. Still today, we have reason for some optimism of the will and intellect. In the the George Floyd protests, the uprising, we see a movement developing that could make the difference, towards achieving social justice and also towards implementing the Green New Deal and its promise of good contributory work, income, and dignity for all.

Update Required To play the media you will need to either update your browser to a recent version or update your Flash plugin.
Download audio file
Topic tags:
Movement for Racial Justice, African American, Community Building, Police

END_OF_DOCUMENT_TOKEN_TO_BE_REPLACED

Film at 11
Travelers dominate the thoughts of our reviewers on Film at 11, for Friday September 25

Voices for the Animals
Aligning values with action: Jessica Janson and the Food For Thought campaign