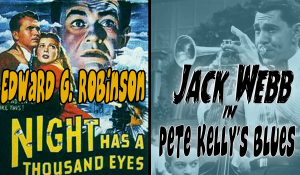 Two vintage radio dramas tonight. First an adaptation of the film version of Cornel Woolrich's suspence filled novel of doomed predestination, "The Night Has A 1,000 Eyes". Edward G. Robinson stars as a phony psychic who suddenly can predict the future. William Demerest also stars as a police detective who is trying to save the life of the young woman who believes she will die at midnight. Also an episode of Jack Webb's rare radio series Pete Kelly's Blues. Set in Kansas City during the Prohibition Years of the 1920's, Cornet player Pete Kelly (Webb) is asked to help out the man who mentored him as a young musician is now in a jam with some very bad men. But in recent years he's has fallen to drink and Kelly has cut himself loose from.

Update Required To play the media you will need to either update your browser to a recent version or update your Flash plugin.
Topic tags:
Arts/Culture, Fiction, Radio Theater
Genre(s):
Radio Theatre