Surveillance on the Pipeline 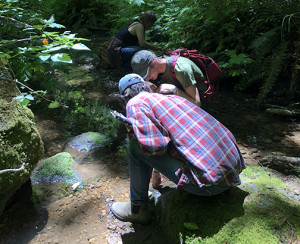 A few weeks ago the Guardian broke a chilling story: "Law enforcement groups, including the FBI, have been monitoring opponents of a natural gas infrastructure project in Oregon and circulated intelligence to an email list that included a Republican-aligned anti-environmental PR operative, emails obtained by the Guardian show. The South Western Oregon Joint Task Force (SWOJTF) and its members were monitoring opponents of the Jordan Cove energy project, a proposal by the Canadian energy company Pembina to build the first-ever liquefied natural gas export terminal on the US west coast, as well as a new 232-mile pipeline that would carry fracked natural gas to the port of Coos Bay."

In many ways this comes as no surprise to activists, many who have been fighting for fifteen years to stop the Jordan Cove LNG export terminal on Coos Bay and the Pacfic Connector Gas Pipeline that would impact nearly 500 rivers and streams throughout Southern Oregon, including four major rivers: the Rogue, Umpqua, Klamath and Coquille. On this episode we talk with a member of the main environmental organization that has been the target of this surveillance. Holly Mills is a member of the Southern Oregon Rising Tide Collective, which is dedicated to promoting community-based solutions to the climate crisis and taking creative, empowering, and direct action to confront the root causes of climate change. SORT is based in the mountains and rivers of rural Southern Oregon, with most of our members living on stolen Takelma land.

You can listen to a preview of Barbara's upcoming documentary about Jordan Cove here: https://kboo.fm/media/75248-jordan-cove-preview

Update Required To play the media you will need to either update your browser to a recent version or update your Flash plugin.
Download audio file
Topic tags:
Activism, Civil Liberties, Energy/Natural Resources, Environment/Climate