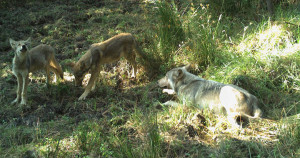 Six pups were born this year to Oregon’s White River wolf pack. A video of the two-to-three-month-old wolf pups howling back and forth with their parents was captured on a trail camera by the Confederated Tribes of Warm Springs, whose reservation is within the pack’s home territory.

“It’s thrilling to hear the call of the wild from these adorable wolf puppies, in a part of Oregon that’s been missing this vibrant sound for more than 70 years,” said Amaroq Weiss, senior West Coast wolf advocate at the Center for Biological Diversity. “But if we want these wonderful animals to survive and flourish, we have to stop the Trump administration from putting an end to their Endangered Species Act protection.”

On this episode of Locus Focus we talk with Amaroq Weiss about the significance of these new wolf pups, which are an encouraging indicator of wolf recovery in Oregon. But at the same time this litter is a reminder of the urgency to defend the laws that protect them.

Oregon’s wolf population as of the end of 2018 was estimated by the state wildlife agency to be 137 individuals in 16 packs, with a total of 15 breeding pairs. Most packs reside in northeast Oregon. Only two packs, the Rogue pack and White River pack reside west of US Highways 97, 20 and 395.

Update Required To play the media you will need to either update your browser to a recent version or update your Flash plugin.
Download audio file
Topic tags:
Activism, Animals, Environment/Climate