Apologies and Manifestos: Conversations with Eve Ensler and Roman Montero 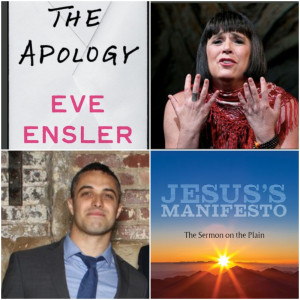 In the first half-hour, Eve Ensler, author of The Vagina Monologues speaks with John Shuck about her latest book (to be released May 14th), The Apology.

Like millions of women, Eve Ensler has been waiting much of her lifetime for an apology. Sexually and physically abused by her father, Eve has struggled her whole life from this betrayal, longing for an honest reckoning from a man who is long dead. After years of work as an anti-violence activist, she decided she would wait no longer; an apology could be imagined, by her, for her, to her. The Apology, written by Eve from her father’s point of view in the words she longed to hear, attempts to transform the abuse she suffered with unflinching truthfulness, compassion, and an expansive vision for the future.

Update Required To play the media you will need to either update your browser to a recent version or update your Flash plugin.
Download audio file
Topic tags:
Activism, Faith/Religion/Spirituality, Family, Gender, History, Sexuality, War/Peace, Women