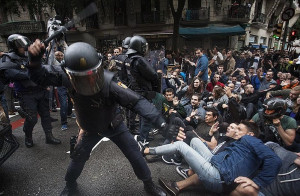 Bill Resnick talks with union activist Steve Early. They consider "police reform" within the criminal justice and class/race systems, as well as the seduction and incorporation of the police and military into anti-left and anti-democratic politics and goals. Portland Cops were quoted as saying they considered the Proud Boys as "regular guys", in distinction to the left and anti-fascists and Black Lives Matter.  Police Chief Outlaw was quoted saying anti-fascist complaints of an unprovoked police attack on August 4th was just "whining" because "we kicked their butt." Steve draws on his experiences
in Richmond California, where the Richmond Progressive Alliance was able to bring some accountability to and demilitarize their police department.

Update Required To play the media you will need to either update your browser to a recent version or update your Flash plugin.
Download audio file
Topic tags:
Activism, Civil Liberties, Police