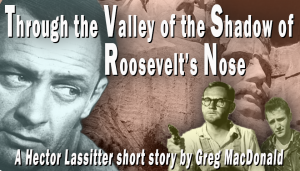 In our first part we present " Through the Valley of the Shadow of Roosevelt's Nose", by Greg MacDonald. Crime novelist and sometime screen writer, Hector Lassiter, known as"'the man who writes was he lives and lives what he writes",  has been hired by Alfred Hitchcock to scout out Mount Rushmore for a suspense movie he is planning. But while there, Hector crosses paths with a pair of sociopathic killers who have been traveling around the country on a murder spree.

Update Required To play the media you will need to either update your browser to a recent version or update your Flash plugin.
Topic tags:
Arts/Culture, Fiction, Radio Theater
Genre(s):
Arts and Culture, Radio Theatre, Spoken Arts