How You Can Help Fight Family Separation at the Border 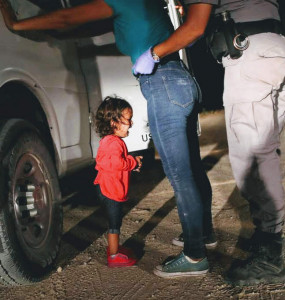 If you’re horrified by news of families being separated at the borders, here’s a bit of news you can use.

First, the policy: It helps to be incredibly clear on what the law is, and what has and has not changed. When Donald Trump and Sarah Huckabee Sanders say that the policy of separating children from their parents upon entry is a law passed by Democrats that Democrats will not fix, they are lying.

There are two different policies in play, and both are new.

First is the new policy that any migrant family entering the U.S. without a border inspection will be prosecuted for this minor misdemeanor. The parents get incarcerated and that leaves children to be warehoused. The parents then typically plead guilty to the misdemeanor and are given a sentence of the few days they served waiting for trial. But then when the parents try to reunite with their children, they are given the runaround—and possibly even deported, alone. The children are left in HHS custody, often without family.

Second is a new and apparently unwritten policy that even when the family presents themselves at a border-entry location, seeking asylum—that is, even when the family is complying in all respects with immigration law—the government is snatching the children away from their parents. Here, the government’s excuse seems to be that they want to keep the parents in jaillike immigration detention for a long time, while their asylum cases are adjudicated. The long-standing civil rights case known as Flores dictates that they aren’t allowed to keep kids in that kind of detention, so the Trump administration says they have to break up the families. They do not have to break up families—it is the government’s new choice to jail people with credible asylum claims who haven’t violated any laws that is leading to the heartbreaking separations you’ve been reading about.

Next: Which groups to support.

• If you’re an immigration lawyer, the American Immigration Lawyers Association will be sending around a volunteer list for you to help represent the women and men with their asylum screening, bond hearings, ongoing asylum representation, etc. Please sign up.

• Al Otro Lado is a binational organization that works to offer legal services to deportees and migrants in Tijuana, Mexico, including deportee parents whose children remain in the U.S.

• The Florence Project is an Arizona project offering free legal services to men, women, and unaccompanied children in immigration custody.

• Human Rights First is a national organization with roots in Houston that needs help from lawyers too.

• Kids in Need of Defense works to ensure that kids do not appear in immigration court without representation, and to lobby for policies that advocate for children’s legal interests. Donate here.

• Pueblo Sin Fronteras is an organization that provides humanitarian aid and shelter to migrants on their way to the U.S.

• RAICES is the largest immigration nonprofit in Texas offering free and low-cost legal services to immigrant children and families. Donate here and sign up as a volunteer here.

• The Texas Civil Rights Project is seeking “volunteers who speak Spanish, Mam, Q’eqchi’ or K’iche’ and have paralegal or legal assistant experience.”

• Together Rising is another Virginia-based organization that’s helping provide legal assistance for 60 migrant children who were separated from their parents and are currently detained in Arizona.

• Women’s Refugee Commission advocates for the rights and protection of women, children, and youth fleeing violence and persecution.

• Finally, ActBlue has aggregated many of these groups under a single button.