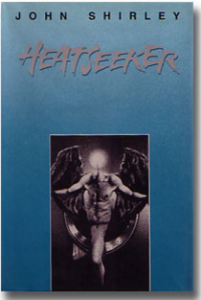 On this special edition of The Digital Divide, we welcome cyber punk author and former Sado Nation John Shirley into the studio for a live interview with special guest co-host Randal Irwin.

We are offering 3 one of a kind rare and collectible signed author/editor proofs as thank you gifts when you become a member during the program.

2 each collectible and original unbound author's proofs of the Heatseeker, the 1989 cyberpunk novel signed by author John Shirley. (these are unbound proofs and do not contain illustrations).

1 each Heatseeker editor's proof that went to the printer. It includes handwritten notes and reference versions of the illustrations by Harry O. Morris. Signed by John Shirley. This is a one of a kind item.

1 retail copy (unsigned) of graphic novel NOTHING CAN STOP ME NOW - Stories Inspired By The Songs Of Nine Inch Nails (released May 2015). This book was released to celebrate the 25th Anniversary of Nine Inch Nails' album Pretty Hate Machine. Each story represents a song on the album. John's contribution is a story called CLOSER, with artwork by Mark Dos Santos

It's not so much that you can't pin a label on John Shirley -- it's that so many are appropriate. He writes fiction that is uniquely his own -- but it has been labeled as science fiction, cyberpunk, noir, horror, post modern literature, erotica, magic realism, dark fiction, suspense, fantasy, and more.

He's a television and film writer; lyricist for bands such as Blue Oyster Cult and D.C. Moon, frontman, musician; essayist...all the labels are appropriate, but no single one is enough. John was a pivotal figure in the creation of Portland's punk music scene in the late 70s with his bands John Shirley and the Monitors and Sado Nation.

After living at various times in Oregon, San Francisco, New York City, France, and Los Angeles, the author has very recently settled down again in the Pacific Northwest.

Update Required To play the media you will need to either update your browser to a recent version or update your Flash plugin.
Download audio file
Topic tags:
Fiction, Media, Arts/Culture
Genre(s):
Punk