Paying the Price for Peace 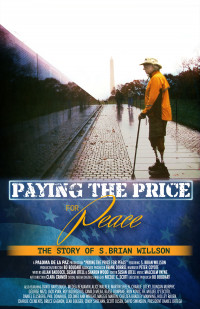 Willson served in the US Air Force from 1966 to 1970, including several months as a combat security officer in Vietnam.

Willson is an educator and activist, teaching about the dangers of U$ imperialist policies. He has participated in lengthy fasts, actions of nonviolent civil disobedience, and tax resistance.

During a non-violent direct action in 1987, in Concord, California, Willson was run over and nearly killed by a military train. Since that time, he has not stopped calling attention to the US government’s defiance of international law through waging endless illegal wars.

PAYING THE PRICE FOR PEACE: The Story of S. Brian Willson is a film produced and directed by Bo Boudart. Narrated by Peter Coyote Associate Producer Frank Dorrel.  The film exposes the truth about the United States’ addiction to war and the lies it perpetuates in order to wage ongoing violence.

The film screens at the Clinton Street Theater on Sunday, July 3rd, at 7 pm.

Brian Willson, Bo Boudart & Frank Dorrel will all be at this Special Premiere Screening.
On July 4th, 2016, Brian will celebrate His 75th Birthday!

You can find out more information on this film at the website:  www.payingthepriceforpeace.com

Update Required To play the media you will need to either update your browser to a recent version or update your Flash plugin.
Download audio file
Topic tags:
Military/Veterans, War/Peace, Activism, Global Affairs