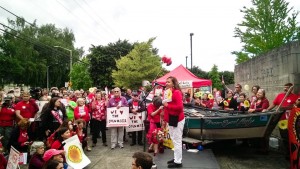 On May 24 over a thousand people attended the first of three public hearings to discuss the draft environmental impact statement for a proposed coal export terminal at Longview, WA. If built, the project, sited right next to the Columbia River, would be the largest coal terminal in North America. At the hearing coal terminal supporters wore blue while opponents wore red and the room was overwhelmed by red.

On this episode of Locus Focus we talk with Roy Staples, one of the leaders fighting the Millenium Bulk Terminals Coal Export Project, about why this project, which is ardently supported by the Port of Longview and many elected officials, has galvanized so much citizen opposition.

Roy Staples, son of a truck driver and a Catholic layperson social helper, Roy has lived in the Pacific northwest for over 10 years, most of it in the Longview area. An environmentalist since the 80's, and a 'graduate' of Midwest Academy's Alinsky style organizing school, he has worked in Longview to expand the campaign of a local organization fighting the proposed Millennium Bulk Terminals Coal Export Project on the Columbia River.