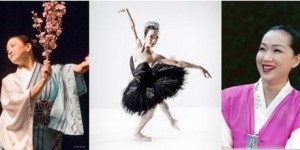 Andre Middleton will interview representatives from the Dances of Three Nations

at which tempers flared among members of some local ethnic communities. He was

positive changes. He contacted representatives of the local Chinese and Korean

that would bring our communities together. Jin Lan, representing the Chinese

cooperate. The resulting performance is called the Dance of Three Nations.

FutureForum is an informal artist talk series focused on audience-artist interaction held at the Hollywood Theatre in Portland, OR. Join us for mind-bending, circuit-melting discussions on the future of art and invention lead by groundbreaking media-artists from around the country. Bring your family, coworkers, Tinder dates, or just your curious self for wild nights of 3D printing, virtual world building, hacked appliances, sorcery, and more! The next event wil be held on June 13th at the Hollywood Theater

Update Required To play the media you will need to either update your browser to a recent version or update your Flash plugin.
Download audio file
Topic tags:
Community Building, Asian Pacific American
Genre(s):
Arts and Culture