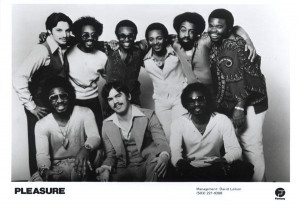 April is Jazz Appreciation Month
Tune in Saturday, April 16, for my sit down with two Portland music legends; Trombonist and composer Dan Brewster, and Tenor Saxoxphonist Dennis Springer. (Interview at 3pm). During the Seventies and eighties both were members of Pleasure, a group that played Soul, Funk and Jazz music. They started in 1972, signed a recording contract with Fantasy Records and RCA Records. The six years together the group compiled a number street saavy hits; GLIDE, BOUNCY LADY, and JOYOUS. Eight albums, and numerous appearances at music festivals, tours, and rubbing shoulders with the biggest names in the music industry like Grover Washington, Jr. Wayne Henderson, and Gabor Szabo, and Ronnie Laws.
Both are still active on the music scene. Springer lives in Atlanta, Ga. He plays clubs, and currently on tour. Brewsters composes songs for local talent Devon Phillips, and works gigs from time to time.
Update Required To play the media you will need to either update your browser to a recent version or update your Flash plugin.
Genre(s):
Jazz