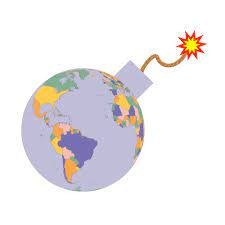 Denise Morris hosts this episode of the Old Mole which features the following segments:

To Combat Climate Despair: At the end of February, the U.N.’s Intergovernmental Panel on Climate Change released another dire report, this time stating that “It’s now or never, if we want to limit global warming to 1.5°C.”  The 1.5 degrees Celsius goal is a crucial global target because beyond this level, so-called tipping points become more likely. Jan Haaken talks today with Haunani Kalama, Associate Producer for the NECESSITY documentary series, about the feelings of despair that can be generated by such scientific reports and how they as filmmakers drew on the emotional lessons from the frontlines of the climate movement.

Putin’s Climate Bomb: Bill Resnick interviews Ted Franklin on Ukraine, how the war diverted attention from the looming cataclysmic threat of climate change and provided a golden opportunity to the fossil fuel industry to demand government support for “energy independence” and “drill baby drill.” Bill and Ted Franklin address how climate action movements worldwide must demand the war stop in a negotiated settlement, and soon. They discuss the war itself, and the deeper reasons for Russia’s disastrous attack, and the settlement terms that are just and make sense. Ted Franklin is a labor and environmental lawyer and activist, a member of the editorial Board of the System Change, Not Climate Change webzine and wrote a recent Op Ed “Putin’s Climate Bomb.”

Judge Jackson and the Court: Despite the barrage of dog whistles and disrespect hurled at her by Republicans during the confirmation hearings, Judge Ketanji Brown Jackson will soon be confirmed as a Supreme Court Justice. In their Left and the Law segment, Jan Haaken and Mike Snedeker discuss the import of Judge Brown Jackson's seating on the Court and how her background and work as a public defender may influence the Court. They also discuss the reactionary history and current direction of SCOTUS and likely anti-democratic upcoming decisions.