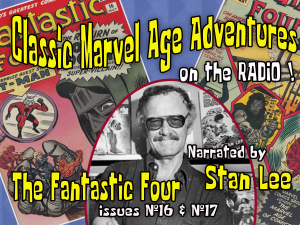 In honor of the 100th Birthday of Stan Lee, the creator of Marvel Comics, and the 60th Anniversary of the appearance of The Fantastic Four, we present a dramatic radio adaptation of Issues #16 & #17 of the The World's Greatest Comic Magazine. Produced in 1968, and narrated by Stan Lee, these two programs follow The Fantastic Four as the are again attacked by Doctor Doom. Part 1 guest stars Ant Man who aids the FF to follow Dr Doom into a sub microscopic world, inspired by Ray Cummings 1919 short story "The Girl in the Golden Atom", where they find themselves "In the Clutches of Dr Doom".