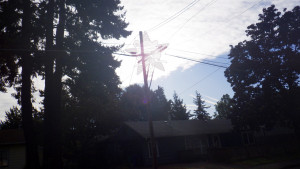 Self Help Radio may have rudely appeared, unkempt & unannounced, at KBOO late last year, but it has spent time on many radio stations in many places.  On October 9, 2002, it premiered on a station called KOOP in Austin, Texas.  Since then, it has been on stations in West Virginia, Kentucky, &, yes, Oregon.  This week, it turns out, is its nineteenth anniversary.  Suffice it to say, hardly anyone expected it to last more than a few months.

On anniversary shows, Self Help Radio revisits an old theme.  The theme "sunlight" was first explored on June 29, 2005, & after the sunny summer Portland just had, it seemed appropriate to return to.  As well, the idea of a show about sunlight in the dead of night was irresistible.  In addition to many songs not heard on the first show (since, in many cases, they hadn't been recorded yet!), the show also features interviews with a composer of sunlight symphonies, a practitioner of sunlight therapy, a foe of sunlight warning against its dangers, & a friend from Austin who may have been in town when the show premiered.  Also, a voicemail from the host's grandparents.  & as a special bonus: audio from that first sunlight show in 2005!  Although we understand it may not seem like a bonus.

Sunlight in the middle of the night.  That seems appropriately KBOO.