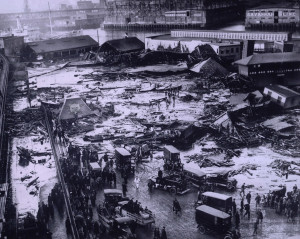 Self Help Radio 070621: Disaster!
Is it courting disaster to make a radio show about disaster?  Asking for a radio friend.

While we certainly do not believe that a radio show can call damage down to itself or to its listeners, we still have a vague, uncertain feeling that coincidence isn't quite what it seems.  So instead of focusing during this show about disaster on specific disasters (whether natural or human-made), we chose to focus on the idea of disaster.  Mostly as a metaphor.  Because that's what songwriters do!  They write songs about life & use things like disaster as a metaphor!  It's not my fault!

If it seems like a lot happened during the show, it did.  Good eye!  If you want to make the joke that Self Help Radio is usually a disaster, well.  We made it before you did.  Nyah.

Information about the original image modified for this page: "Panorama of the Molasses Disaster site" by Boston Public Library is licensed under CC BY 2.0