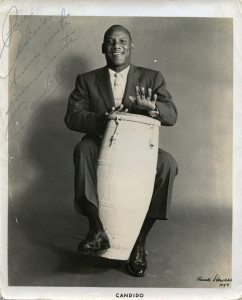 Join The Incredible Kid for a two-hour tribute to the late Afro-Cuban percussion master Cándido Camero who passed away at the age of 99 in November of 2020. An NEA Jazz Master, recipient of a Latin Grammy Lifetime Achievement Award, the first conga player to play multiple congas together, the first to play conga and bongo together, the first to pitch congas to different notes in order to play melodies, Cándido’s many TV appearances in the 1950’s were a major influence in inspiring bongo and conga players throughout the United States. An innovator in Afro-Cuban jazz, some credit him as the primary figure in making the conga a standard part of the jazz percussion lineup. He also designed and created the first foot-operated cowbell in the 1950’s. (He was way ahead of the “more cowbell” curve.) Cándido was also an innovator in Latin Funk and Latin Disco where he found his greatest solo success. While he recorded with a voluminous number of artists including Machito, Billie Holiday, Duke Ellington, Dizzy Gillespie, Charles Mingus, Celia Cruz, Elvin Jones, Tito Puente, Dinah Washington, Count Basie, Stan Kenton and so many more, this special will focus exclusively on the many albums Cándido recorded under his own name over seven decades. Find out why they called him the Thousand Finger Man.

Update Required To play the media you will need to either update your browser to a recent version or update your Flash plugin.
Topic tags:
Music
Genre(s):
Afro-Caribbean, Jazz, Latino/a