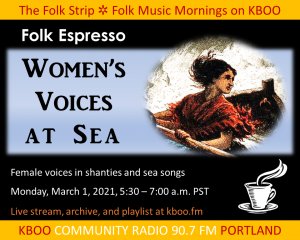 Sea shanties and sea songs have been getting a lot of attention recently, partly because they are sturdy songs that can be sung with gusto. Any number of people can sing them together, and spontaneous harmonies just add to the richness of the singing experience. This episode of Folk Espresso, “Women’s Voices at Sea,” celebrates female voices singing shanties and sea songs.

Update Required To play the media you will need to either update your browser to a recent version or update your Flash plugin.
Topic tags:
Music, Gender, History, Women
Genre(s):
Folk