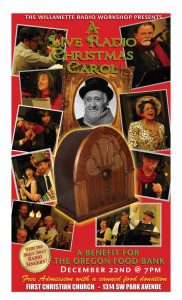 It’s Christmas morning here in the neighborhood, maybe in your neighborhood as well. And we’ve been in somewhat of a quandary as to how to honor and celebrate the day. I think the classic story for the day and the entire holiday season is Charles Dickens’ A Christmas Carol, first published on December 19, 1843. It was an instant hit with readers, selling out its first edition by Christmas Eve just a few days later.

Fortunately, our friends at Willamette Radio Workshop came to the rescue, like Santa's elves, and delivered a recording of their very popular Radio Christmas Carol under Mr. Jones's tree (much safer than trusting it to Ernie, the neighborhood mailman). We'll be playing that for you today in the spirit of the holiday.

This performance was recorded live on-stage at First Christian Church in Portland, Oregon in front of a live audience (remember live audiences?). The play was adapted by Cynthia J. McGean from the Charles Dickens story and the Campbell Playhouse version. The cast includes Tim McKennie, James Dineen, Greg Alexander, Alan King, Cynthia McGean, Renee Boutin King, Mary Thomas and Sam A. Mowry. Live music and carols provided by The Holly Jolly Radio Choir, directed by Bennett Bailey and featuring over twenty singers! And the audio was recorded and mastered by D. Neil Blake.

Wishing you all much joy and happiness in your neighborhood, and a better, brighter new year!