All I want for Christmas is Immigration Reform 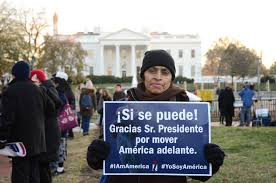 Bill Resnick speaks with Larry Kleinman in the second of a two part interview. Larry Kleinman, one of the founders of PCUN, Oregon’s farmworkers union is now an organizer with Fair Immigration Reform Movement (FIRM), the national lobby for immigrant rights. The first part of their interview aired on December 14th and laid out the political landscape for immigration reform once Biden enters office. Today they talk about what you’ll find on the Christmas wish list of the immigrant community, much of which could be done by Biden without going to Congress, simply by reversing Trump executive orders and agency policies and promulgating his own.

Update Required To play the media you will need to either update your browser to a recent version or update your Flash plugin.
Download audio file
Topic tags:
Activism, Immigration, Government/Politics