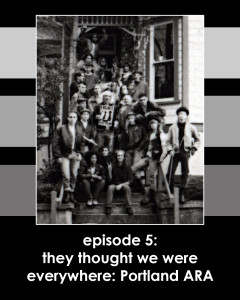 In this episode we return to the Rose City as Portland punks solidify an anti-fascist stance and square off. No more mingling with spiky-haired punks one night and racist skinheads the next; the chronic bypassing of casual racism becomes confrontational. We hear from punks Chyna, Jason, Kelly and Jorin, activists Scot Nakagawa, M. Treloar, and Jonathan Mozzochi, and journalist Patrick Mazza about different tactics for organizing across different groups and the surprising effect it has on the scene.

Editors: Erin Yanke and Icky A.

Music: (in order of appearance)

Update Required To play the media you will need to either update your browser to a recent version or update your Flash plugin.
Download audio file
Topic tags:
Civil Rights/Human Rights, Community Building, History, Race, Youth