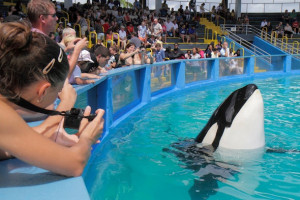 It’s been 27 years since the movie 'Free Willie' launched an effort to free Keiko, the orca who was the star of the film—from his small tank in Mexico and return him to the wild. But there are many other orcas still in captivity, including one who has been living and performing in a small tank in Miami for 50 years. KBOO Reporter and Voices for the Animals host Michele Coppola has more on the ongoing efforts to Free Lolita, speaking with Michelle Bender of Earth Law Center in Seattle who is part of the legal team assisting the Lummi Nation.

Update Required To play the media you will need to either update your browser to a recent version or update your Flash plugin.
Download audio file
Topic tags:
Activism, Indigenous, Animals