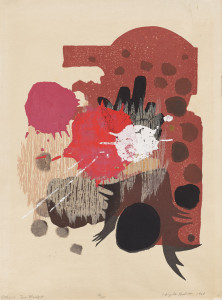 Joseph Gallivan interviews Jeannie Kenmotsu, the curator of Japanese art at the Portland Art Museum, about the show “Japan’s Women Printmakers” which is on now through April 2021 at the museum.

On Tuesday October 20, 2020 at 11:30 a.m. Joseph Gallivan interviews Jeannie Kenmotsu, the curator of Japanese art at the Portland Art Museum, about the show “Japan’s Women Printmakers” which is on now through April 2021 at the museum.

Kenmotsu talks about how a group of printmakers formed a group to show their work, which was experimental even in the Mad Men-type art world of postwar Japan. They weren’t avant garde but nor could they be dismissed as mamasan printers or mommy artists.

In October 1956, a vibrant group of contemporary etchings, relief prints, and lithographs went on display in a Tokyo gallery. This was the debut exhibition of Japan’s first printmaking society for women artists, the Joryū Hanga Kyōkai, or the Women’s Print Association. It provided a crucial vehicle for talented female printmakers working in a crowded field of male maestros. For the next decade, the nine professional women artists who founded the society would continue to stage exhibitions of their work—culminating in a triumphant show in New York City in 1965—before going on to pursue successful solo careers. Drawn from the Museum’s permanent collection and important private collections, this exhibition unearths a critical, dynamic, and understudied episode of modern printmaking history.

This exhibition presents a timely look at the careers of the group’s founding members and others who joined in successive years. Many of the works by these female printmakers are now extremely rare. Only a few of the artists, mostly in their 90s, are alive today. Yet their collective body of work is as diverse as it is visually captivating. In Joryū Hanga Kyōkai, 1956–1965, works by artists like Iwami Reika (1927-2020), Kobayashi Donge (b. 1926), Shima Tamami (1937-1999), Uchima Toshiko (1918–2000), and Yoshida Chizuko (1924–2017) demonstrate the expansive and fiercely creative vision of Japan’s first women printmakers association.

This show was recorded on a handheld Zoom HS2 in Portland on Oct 14, 2020, in the Portland Art Museum.