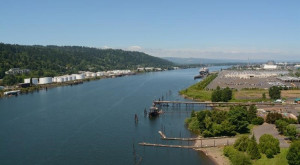 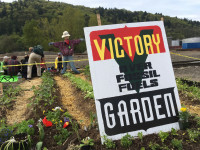 Ursula LeGuin’s story "The Ones Who Walk Away From Omelas" describes a utopian city where everyone lives good lives, except for the neglected child chained in a basement. Portland, which prides itself on its progressive attitudes, also has such a metaphorical child: the communities in North and Northwest Portland, that were once thriving neighborhoods, now displaced and defiled by the growing pains of the Port of Portland.

On this episode of Locus Focus we talk with Elijah Cetas, with the Braided River Campaign, about how this coalition of neighborhood groups and climate activists has organized to tell these forgotten stories, while addressing city and regional policies that have created industrial sacrifice zones along the Willamette River.

The campaign welcomes your support creating art in the fossil fuel hub of NW Portland, and in bringing community to the table for the City's Economic Opportunity Analysis update. For questions, or to get involved, contact braidedrivercampaign@gmail.com. Here are some excerpts from a letter the Braided River Campaign sent a letter to the city of Portland last week regarding the City's Economic Opportunity Analysis.

The Braided River Campaign is a project of community members, Willamette River advocates, and residents of North and Northwest Portland. We have come together to elevate the experiences of those impacted by the legacy of industrial developments and fossil fuel infrastructure in the North Portland Harbor, from the Broadway Bridge to Sauvie Island. We are committed to working with the City of Portland and other government partners to create a community conversation and new vision for our future relationship with these lands and waters.

Today, we are writing to convey our priorities for a more inclusive and comprehensive Economic Opportunities Analysis (EOA) update.

This update is important to us, as its outcome will undergird and define important City plans affecting the Willamette River and our communities, including the 2035 Comprehensive Plan, the North Reach River Plan, and the goals of the Climate Emergency Declaration. Despite the significance of this analysis, past EOAs have historically lacked the inclusion and participation of those who live closest to the industrial areas being assessed. They have relied on the premise that more industrial lands means more jobs, and narrow definitions of economic growth as representing economic opportunity. This in turn has created the unacceptable situation where industrial landowners’ desires for further acreage of available industrial lands is valued above the health and wellbeing of our communities, the river, and the climate. It is imperative that this upcoming EOA not replicate business-as-usual practices, but instead lay a foundation for a future working waterfront that is both more environmentally sound, more economically beneficial, and more just. . .

This EOA is a crucial opportunity to set a course for climate action in our City and across our region. The climate crisis is unleashing devastating impacts that worsen every year. These impacts are not equally distributed; Indigenous, Black and immigrant communities in low income neighborhoods face these mounting disasters first and worst, including the neighborhoods of North and Northwest Portland. . . Fenceline communities and workers in the fossil fuel industry and other highly polluting jobs deserve to have a seat at the table as we collectively plan for the managed decline of fossil fuel infrastructure and a new, green economy. This EOA must establish this vision outright to make this necessary transition possible and just. Failing to do so only postpones the inevitable, burdening future generations with this difficult task.

We must act swiftly. As we move forward, in the shadow of the COVID-19 pandemic and economic crash, we have the opportunity to work together to prevent the documented risks that industrial sacrifice zones create for our most marginalized communities. We know now that we can, as a city, state and region, plan for a cleaner, safer and more equitable transition to a healthy, safe, and working waterfront.

Update Required To play the media you will need to either update your browser to a recent version or update your Flash plugin.
Download audio file
Topic tags:
Activism, COVID19, Movement for Racial Justice, Community Building, Energy/Natural Resources, Environment/Climate, Indigenous