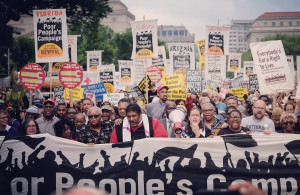 Laurie Mercier speaks with Rev Dr. Liz Theoharis Director of the Kairos Center for Religions, Rights, and Social Justice and Co-Chair, with Rev William Barber, of the Poor People’s Campaign: A National Call for Moral Revival. They discuss the Poor People’s Campaign Moral Budget and Jubilee Platform, which call for investing in the welfare of all instead of in punishing the poor, and how poor and low-wealth people, the majority, are rising up to end the interlocking evils of systemic racism, poverty, the war economy, and ecological devastation.