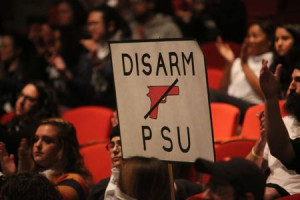 "Even when you're working in a basement, and you're hungry, and you're tired, and you aren't getting paid, and you're 19, and you're in your undergrad, and you feel stupid and like nothing you do matters -- it does matter, if you can stay vigilant and stay consistent and stick to what you believe in."

On Thursday, August 13th, Portland State University announced that it would disarm its public safety officers in the coming term. This announcement marks a hard fought victory for the group Disarm PSU, made up of students, staff and faculty. The group has opposed and demonstrated against the arming of campus security officers since before the decision was made in 2015.

Their calls for disarmament amplified in 2018 when campus security officers shot and killed a 45 year-old Black man named Jason Washington. At the time, Washington had been breaking up a bar fight.

Now, one aspect of his tragic death has been addressed by the university administration. Campus security will no longer carry guns.

KBOO's Althea Billings spoke with Disarm PSU organizer Olivia Pace about the road to this landmark decision, what comes next, and what the fight has taught her as a young organizer.

Update Required To play the media you will need to either update your browser to a recent version or update your Flash plugin.
Download audio file
Topic tags:
Activism, Movement for Racial Justice, Education, Police, Youth