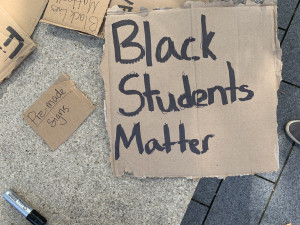 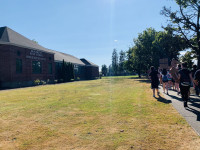 Flyers circulated the crowd, explaining the demands for the school district. The first notes discipline, namely that school resource officers or SROs should be removed from schools and that the schools should have a policy on hate speech. School Resource officers are police officers stationed in schools, and have been a focus for school related racial justice reform. The flyer points out that in 2015, 20 of the 30 students referred to police in the school district were students of color.
The next demand is about curriculum. The students advocate for curriculum with an anti-racist focus and the introduction of culturally responsive teaching. Culturally responsive teaching acknowledges culture as being central to learning, according to Brown University. It recognizes the importance of including students' cultural references in all aspects of learning.
Staffing and hiring are also included in the equity demands of the Beaverton School District. According to the flyer distributed at the protest, school district staff is 86% white, but white students only make up 47% of the student population. The group says that staff need anti-racist training and diverse hiring.
Students also ask for greater accountability, specifically that graduation data and data on exclusionary practices be given quarterly. In this case, exclusionary practices refer to discipline given to students that take them out of the classroom, with the most common being suspension and expulsion.
Access is also highlighted in the equity demands. Currently, the students assert that report cards and many other documents are only provided in English. They demand that the Beaverton School district improve interpretation and translation services and support to parents and families.