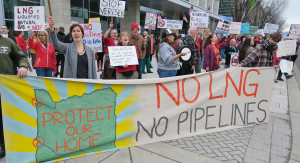 Last fall we aired Holding the Thin Green Line, a two part radio documentary about the increasing pressure on the Pacific Northwest to become an export hub for the fossil fuel industry - and the thin green line of resistance that is standing in the way of this development. The second hour tells the story of the fifteen year struggle by community members, landowners and indigenous people in Southern Oregon to stop the Jordan Cove LNG export terminal at Coos Bay, Oregon, and its companion 229 mile long, 36″ wide pipeline transporting fracked gas across four counties in Southern Oregon.

Many new developments in this campaign to stop Jordan Cove LNG and the Pacific Connector Gas pipeline have transpired since this program first aired. I have updated the show a couple times, most recently last month, to reflect the victories and setbacks as the people of Southern Oregon continue to fight and raise their voices to stop this assault on their homes, communities and land. Today we’ll hear the latest version of The Long and Twisted Tale of Jordan Cove. . .as the saga continues.

You can also see a documentary slideshow based on The Long and Twisted Tale of Jordan Cove LNG, presented by the Salem Progressive Film Series, which has become a virtual film festival for the duration of this pandemic, and co-sponsored by KBOO. You can watch the slideshow online from the comfort of your home during the week of July 27 at holdingthethingreenline.org/jordan-cove-slide-show, and on July 31 at 6:30 pm there will be a live Q&A session via Zoom, with impacted landowners, community organizers and land and water protectors who are featured in the documentary. To register for the Zoom webinar click here. More information can be found at KBOO.fm on the right side of the homepage under community events.

Update Required To play the media you will need to either update your browser to a recent version or update your Flash plugin.
Download audio file
Topic tags:
Activism, COVID19, Energy/Natural Resources, Environment/Climate

The World of Jazz
Fresh Tracks From Home