Community control of police challenges the power relationship between police and oppressed communities: a conversation with Max Rameau 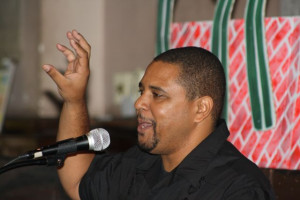 Protests spurred by the police murder of George Floyd have called for abolishing, or defunding the police. Defunding the police may not be the only way to hold police accountable and improve communities, however. Instead, some advocate for local community control of the police. In their vision, cities could be divided into policing districts and allow those communities to decide if they would like to maintain their police force as is, or change to a community controlled model.

One such advocate is Max Rameau of the group Pan-African Community Action. Rameau is a Haitian born Pan-African theorist, campaign strategist, organizer and author of the book "Take Back the Land."

He spoke with KBOO's Jenka Soderberg about the case for community control of the police.

Update Required To play the media you will need to either update your browser to a recent version or update your Flash plugin.
Download audio file
Topic tags:
Movement for Racial Justice, African American, Community Building, Police