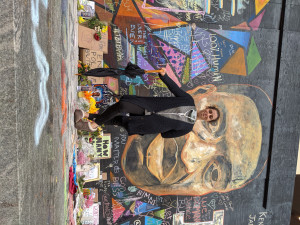 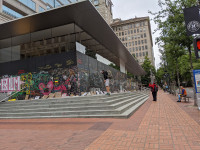 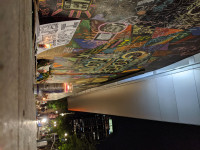 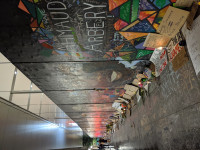 Sorry about the sideways photos: it's a content management system thing.

On Tuesday June 16, 2020 at 11:30 a.m. Joseph Gallivan interviews painter Emma Berger who started the George Floyd memorial mural on the boarded up Apple Store in downtown Portland which then became a collective mural commemorating other Black Lives Matter subjects. Berger talks about how she got the impetus to paint it, what happened when other people joined in, and what it is like live painting with input from passersby. Berger is an illustrator by training and works at Laika making models for their animated movies.

This show was recorded in the street outside the Apple Store at 4th Avenue and Yamhill in downtown Portland on June 12, 2020 with moderate social distancing.

Update Required To play the media you will need to either update your browser to a recent version or update your Flash plugin.
Download audio file
Topic tags:
Arts/Culture, Movement for Racial Justice, Civil Liberties
Genre(s):
Arts and Culture