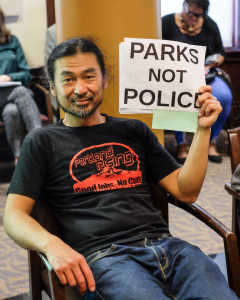 Desiree Hellegers talks with activist Hyung Nam, who served on the city-appointed citizens Police Budget Advisory Committee, and who organizes with the Portland Metro People’s Coalition, which has been working with Unite Oregon, Portland African American Leadership Forum, and folks in other groups to win reductions to the Portland Police Budget and Reinvestment in services needed by marginalized and especially BIPOC communities, and is looking ahead to the negotiations on the Police Contract and to developing a People’s Budget. They mention recent articles by Linda Senn in the Oregonian and David Sirota in Jacobin.

Update Required To play the media you will need to either update your browser to a recent version or update your Flash plugin.
Download audio file
Topic tags:
Activism, Movement for Racial Justice, Community Building, Economy

END_OF_DOCUMENT_TOKEN_TO_BE_REPLACED

Film at 11
Travelers dominate the thoughts of our reviewers on Film at 11, for Friday September 25

Voices for the Animals
Aligning values with action: Jessica Janson and the Food For Thought campaign