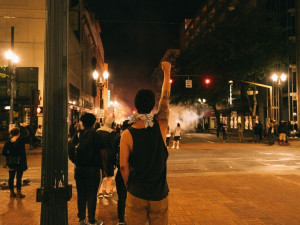 Just as protests against police brutality and racial injustice began in Portland, the Portland General Defense Committee established the PDX Protest Bail Fund to cover bail and legal expenses for participants arrested in the demonstrations related to George Floyd's murder by police in Minneapolis.

Community members continue to contribute to their GoFundMe site, however the group ran into some difficulty in receiving the donations, due to illegitimate reports of fraud to the site.

KBOO's Althea Billings spoke with Raul of the Portland General Defense Committee to learn more about the bail fund, its application, and the importance of legal support for activists.

Update Required To play the media you will need to either update your browser to a recent version or update your Flash plugin.
Download audio file
Topic tags:
Activism, Movement for Racial Justice, Law/Court/Crime