Voices from the Edge Move to Center Stage 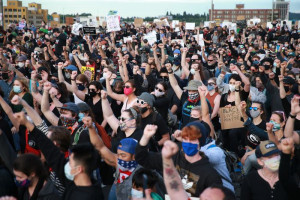 By the time this episode of Locus Focus airs it will be three weeks since George Floyd was murdered by Minneapolis police and a wave of massive, militant protests radiated from Minneapolis across the country and the world. This amazing show of support for the Black Lives Matter movement is like nothing anyone of us have seen in our lifetimes, far more widespread and diverse than the civil rights and anti-war protests of the 1960s and early 70s. Now that we're starting to see meaningful responses from all levels of government to the calls for ending police violence and systemic discrimination against communities of color, how do we keep up the pressure to ensure that these changes and more stick?

Here in Portland, there is no one better able to address these issues than Portland City Commissioner Jo Ann Hardesty, who has been calling out police violence and racism in Portland for years as a community organizer and now finally as a city commissioner. On this episode of Locus Focus we are happy to have Jo Ann join us to discuss the changes she and other progressive city leaders are proposing to transform the culture of the police and our community as a whole.