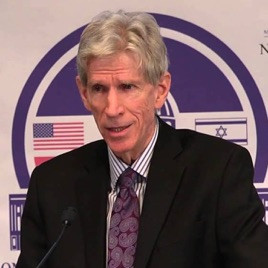 Gareth Porter stops by the podcast to discuss his long standing work on the Vietnam war, his thoughts on COVID-19 via the USS Theodore Roosevelt along with his previous work on the 1919 flu epidemic, the terrifying connections between Mike Pompeo and Bibi Netanyahu, and Israel’s secret long standing nuclear stockpile.

Gareth Porter is an independent investigative journalist who has covered national security policy for decades, really, and was the recipient of the 2012 Gellhorn Prize for Journalism for his coverage of the U.S. War in Afghanistan.  He is a graduate of the University of Chicago and Cornell, where he earned a Ph.D. in Southeast Asian Studies.  Much of his early work - as scholar and activist - surrounded the American War in Vietnam.  He was, in fact, a chairman of the Committee of Concerned Asian Scholars at Cornell and then a Saigon Bureau Chief in country.  Especially since 2005, he’s regularly reported on political, diplomatic and military developments in the Middle East for a variety of mainstream and alternative publications.

His previous books include Perils of Dominance: Imbalance of Power and the Road to War in Vietnam, and Manufactured Crisis: The Untold Story of the Iran Nuclear Scare (2014), among many others.  His most recent is The CIA Insider’s Guide to the Iran Crisis co-authored with John Kiriakou.  Currently, he has a column at the GrayZone.

Enjoy the show?!  Please leave us a review right here.

Not a contributor on Patreon? You're missing out on amazing bonus content! Sign up to be one of our contributors today! - www.patreon.com/fortressonahill

A special thanks to our honorary producers - Will Ahrens, Fahim Shirazee, Henry Szamota, Adam Bellows, Eric Phillips, Paul Appell, Julie Dupris, Thomas Benson, Emma P, Janet Hanson, Lawrence Taylor, and the Statist Quo Podcast.  Without you guys, we couldn't continue our work.  Thank you so much!!!

Update Required To play the media you will need to either update your browser to a recent version or update your Flash plugin.
Download audio file
Topic tags:
COVID19, Activism, Civil Rights/Human Rights, Global Affairs, Government/Politics

END_OF_DOCUMENT_TOKEN_TO_BE_REPLACED

Too Much Information with Abe and Traci
End of an error