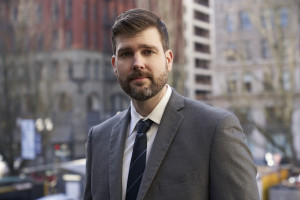 In November, Multnomah County voters will elect a new District Attorney, a position that has a great deal of discrestion when it comes to deciding who gets charged with a crime, and who doesn't, as well as the severity of the charge. One candidate is Mike Schmidt, who has previously worked in the DA's office with former Multnomah County District Attorney Mike Schrunk. In 2015, he was appointed to be the Director of the Criminal Justice Commission, an organizing body that serves as the policy development forum for state and local criminal justice systems. He is Vice President of the National Criminal Justice Association, and serves on the board of the National Association of Sentencing Commissions.

He is running against Ethan Knight, who was recently graded a 'D' by the organization Oregon DA for the People. Schmidt was graded a 'B'.

He has been endorsed by The Oregonian, Willamette Week, Kate Brown, and various unions and justice organizations across Oregon.

Schmidt spoke with KBOO's Nat Moon about lowering the mass incarceration rate, abolishing cash bail, and dealing with ICE in our communities.

More information about his platform is available at mikeschmidtforDA.com.

Update Required To play the media you will need to either update your browser to a recent version or update your Flash plugin.
Download audio file
Topic tags:
Immigration, Law/Court/Crime