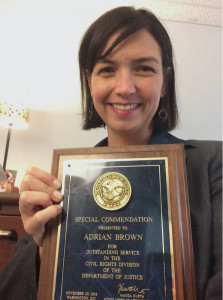 We’re fortunate to have one of those candidates with us today -- Adrian Brown. Adrian’s been, an assistant U.S. attorney in Oregon for the past 12 years, serving as the department’s civil rights coordinator. She’s also handled cases involving the state’s mental health system, Portland police practices, and disability access. She previously worked for seven years as a lawyer in the U.S. Air Force, where she served as a counsel for Air Force personnel.

Please remember to vote in the upcoming Oregon Primary Election. You can mail your ballot back by May 14th, or bring it to any Official Ballot Drop site by 8pm on Tuesday, May 19th.

Update Required To play the media you will need to either update your browser to a recent version or update your Flash plugin.
Download audio file
Topic tags:
Activism, Community Building, Government/Politics, Law/Court/Crime, Women