Trump's War on the Environment Using the Pandemic as Cover 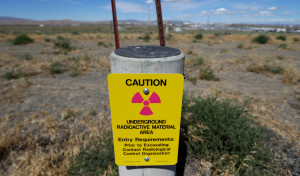 While the world is focused on the COVID-19 pandemic, the nuclear and fossil fuel industries are keeping busy trying to slip through their latest devious plans. But activists are on to them, even from their socially distanced locations. On this episode of Locus Focus we talk again with Dan Serres, Columbia Riverkeeper's Conservation Director, about radioactive fracked waste that has been illegally dumped in Arlington, Oregon, while at the same time the Trump Administration is trying to loosen the requirements for cleaning up the Hanford Nuclear Reservation, one of the most toxic places in the world. We'll talk about what's being done to fight these outrages, while we all continue to try to stay safe and healthy at home.

Dan Serres works to engage diverse communities along the Columbia. In 2005, he started with Columbia Riverkeeper as the lead organizer in s successful campaign to protect the Columbia River Estuary, forests, and farmland from the Bradwood Landing and Oregon LNG Liquefied Natural Gas (LNG) proposals and their related pipelines. Since 2009, he has filled the role of Conservation Director where his work has broadened to protecting the Columbia River from a barrage of dirty fossil fuel export proposals including LNG export terminals, coal export terminals, oil-by-rail facilities, and power plants. Dan is also a member of the Hanford Advisory Board, where he speaks up as a public voice demanding faster and more robust cleanup of North America’s most contaminated nuclear site. He is a fourth-generation Oregonian, born and raised outside of Oregon City.

Update Required To play the media you will need to either update your browser to a recent version or update your Flash plugin.
Download audio file
Topic tags:
Activism, COVID19, Energy/Natural Resources, Environment/Climate