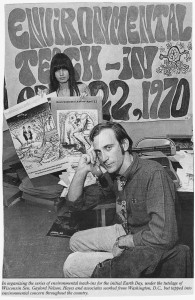 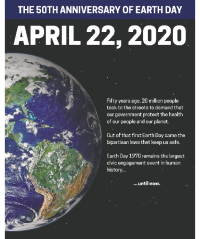 On April 22, 1970, millions of people around the world mobilized to celebrate the first Earth Day, helping to kickstart the modern environmental movement.

On this episode of Locus Focus, we talk with Denis Hayes, who coordinated the first Earth Day – as once again, all around the world – we celebrate the 50th anniversary of Earth Day, which in light of the COVID-19 pandemic takes on a poignant meaning none of us could have imagined 50 years ago.

Denis Hayes is an environmental advocate and advocate for solar power. He rose to prominence in 1970 as the coordinator for the first Earth Day. Hayes founded the Earth Day Network and expanded it to more than 180 nations. During the Carter administration, Hayes became head of the Solar Energy Research Institute (now known as the National Renewable Energy Laboratory), but left this position when the Reagan administration cut funding for the program. Since 1992, Hayes has been president of the Bullitt Foundation in Washington and continues to be a leader in environmental and energy policy. Hayes has received the national Jefferson Awards Medal for Outstanding Public Service as well as many other awards. Time Magazine named him as "Hero of the Planet" in 1999.

On the 50th Anniversary of the first Earth Day, join the Stop the Money Pipeline Portland coalition for the 3-day livestream of national Earth Day Live. See 350pdx.org for all the details. On Earth Day, Wednesday, April 22nd, participate in a Virtual Climate Justice Rally at 4pm. And sign up to stop climate destruction by a Digital Takeover of Chase Bank -  the largest funder of the fossil fuel industry. Go to 350pdx.org to join us online.

Update Required To play the media you will need to either update your browser to a recent version or update your Flash plugin.
Download audio file
Topic tags:
Activism, Environment/Climate, COVID19, History