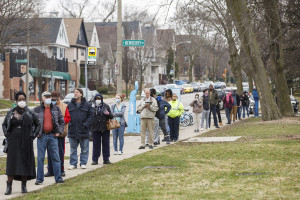 The state of Wisconsin held an in-person primary election today – despite a state-wide stay-at-home order due to the coronavirus outbreak.

Last night the U.S. Supreme Court stepped in with a five to four decision, which was highly criticized by dissenting judge Ruth Bader Ginsburg, to prevent the state from extending its deadline for the return of absentee ballots.

Meanwhile, over 180 polling locations have been reduced to just eight due to the lack of election inspectors.

KBOO's Jenka Soderberg spoke with Jay Heck, the Executive Director of Wisconsin Common Cause to learn more about how the pandemic has led to voter suppression

Update Required To play the media you will need to either update your browser to a recent version or update your Flash plugin.
Download audio file
Topic tags:
COVID19, Law/Court/Crime, Government/Politics