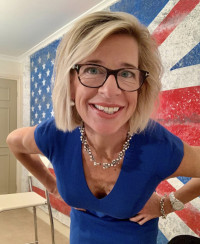 Katie Hopkins is relatively new to us in the US.

However, in the UK Katie is known for being Britain’s most hated person due to her unapologetic outspoken views, she does not conform to PC convention.  Katie has admitted that her opinions have made her unemployable in the UK.

I’ve watched Katie on several media outlets and her Twitter account is very active with over a million followers.  When (via Twitter) I saw that Katie was in the US for a speaking tour I had to reach out and ask for an interview.  This is a woman who has been called a racist, a vile bigot, hateful monster, abusive…the list goes on….they want her silenced by yet they won’t or can’t stop talking about her.

Katie’s resiliency is fascinating, it’s like she’s fireproof.  I found her to be quite spectacular.

Who is Kate Hopkins?

Update Required To play the media you will need to either update your browser to a recent version or update your Flash plugin.
Topic tags:
Activism, COVID19, Media, Women

END_OF_DOCUMENT_TOKEN_TO_BE_REPLACED

The Dirtbag
Harvesting figs, pears, and apples; plus curing and storing onions