The Never-ending Saga of the Hanford Cleanup 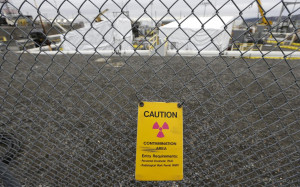 The Hanford Nuclear Reservation - along the Columbia River 200 miles upstream from Portland, is one of the most contaminated places on the planet. Once a bustling production facility for Plutonium and later a proposed site for the United States' permanent nuclear waste repository, it now houses a nasty concentration of radioactive and toxic chemical waste that was supposed to be cleaned up years ago. Cleaning up that waste has been the main mission at the site since 1989, and experts say there are decades of work remaining, at an estimated cost of $3 billion a year to adhere to a legal agreement between the state and federal governments that sets deadlines for the cleanup.  But last month the Trump administration once again proposed to cut 700,000 million dollars from the Hanford Cleanup Budget budget.

On this episode of Locus Focus we talk with Tom Carpenter, Executive Director of Hanford Challenge in Seattle, about why these cuts would be so devastating to the cleanup effort, especially in light of the urgency to stabilize Hanford's crumbling infrastructure which could imminently collapse, unleashing even more contamination.