Lâm Quãng presents "A Stand Up Tragedy," and sits down to discuss his experience as a Vietnamese refugee and the power of storytelling 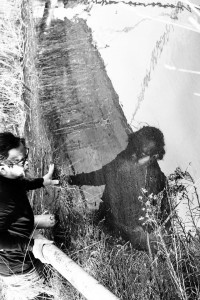 In a twist on the tradition of “stand up comedy, ” Astoria-based artist and Vietnamese refugee Lâm Quãng is creating a new show.

It’s entitled “A Stand Up tragedy, a fireside chat with Lâm Quãng.”

KBOO’S Althea Billings spoke with Quãng about his upcoming fireside chat,  the experience of being a Vietnamese refugee, and the role of storytelling in his new project.

Lâm Quãng  0:00
Hi, my name is Lâm Quãng. I presently live in Astoria, Oregon. I have lived in Portland in- from '98 for about a good 20- 20 years in Portland before- prior to moving out to Astoria.

Althea Billings  0:22
Cool. And so I understand you have an upcoming show entitled A Stand Up tragedy, a fireside chat with Lâm Quãng. Can you tell us what people will get to see at that show?

Lâm Quãng  0:33
Yes, this is something that I have been thinking for- about for quite a while. I am a Vietnamese refugee. I came over with my family in '75. I came out of Vietnam fairly unscathed with my mom and two younger brothers. And of course we left some family behind. And I just wanted to tell the stories of a country, about the war, and the story of what my family- especially what my mom went through to raise us and keep us safe from the- from the war.

Althea Billings  1:25
And so what inspired you to create this show?

Lâm Quãng  1:29
The- really the impetus has been- I've been thinking about this for quite a while about all the war that this country United States inflicts up on the rest of the world mostly. And I just want to tell my story, just a story of a war that went through during my time there and to shed light on the atrocity that went on, and the suffering of mostly the example of, you know, my- my family and my mother, and what my people, what my people went through and all the- all the bombings and, and the suffering that happened there. It's something I have thought about for quite a while and, of course, learning and listening and reading more and more of the stories of what went on and what still goes on in different parts of the world. Where United States continually inflicts their military might against people or, around the world.

Althea Billings  3:03
Right. And what are you hoping people get out of seing your show?

Lâm Quãng  3:08
I call it 'stand up tragedy.' Versus well, stand up comedy is something I've thought about, but it just did not fit into what I want to do. The word the- the phrase 'stand up' has a lot of connotation. Stand up for your rights, stand up to speak up. I want- my ideal- this is, this is much bigger than me. I want this to be a healing process. I know a lot of people that goes through suffering different tragedy in their lives, be it  a war torn country, be sexual harassment or whatever, we all have these stories to tell and really need to get out there, it's quite a cathartic experience to get out there. It's- it's pretty scary as well. You really put yourself out there. And I'm hoping that people understand what you're going through and accept what you went through. And it's quite a healing process. And I want this to evolve into much more than just me I want to eventually host and help people tell their stories.

Althea Billings  4:46
So how do you see your experiences of Vietnamese refugee parallelled than our current political situation?

Lâm Quãng  4:54
Oh, so much. While you know all the bombing and-and United States is an empire and accepted or not it is an empire that inflict the military might throughout the world. In Vietnam, I don't know if most people know about this but the United States dropped more bombs in Vietnam, Cambodia, Laos and Southeast Asia that were than all of World War II combined and not to mention all the chemicals that was dropped there. So what goes on? Now is not that much different. We, I guess are responsible, we are paying for the US Defense Department to inflict war and taking resources from the different places around the world you know, Syria, Iraq, Somalia, you name it is- in South America, its a continued process to remove, and taking resources from these places and conflict are quite- pretty brutal and pretty brutal, pretty cruel. Shall we say- I guess for lack of a better word, it's the forces that inflicted upon these places, not just the people but the, the plants, the trees, the animals being continually being destroyed and we are in a world of hurt right now with this environment is being constantly destroyed by especially that the military is a huge part of this process. And we need to stand up and speak out.

Althea Billings  7:12
Yeah. And that no part of this sort of exploitation is isolated. It's all intertwined.

Lâm Quãng  7:18
Exactly. It's- it goes on and on and on. And we, like I said, we have so much to tell. There's so many different people that need to get their stories out. Just an example of somewhere- I mean here in Hillsboro where my boys have his soccer practice, and it's this tiny little farm that is left of what the city has taken over. And through using their taxes and taking the land and basically extracting the- the land and selling to highest bidder and people were losing a lot very quickly. And people need to tell the story. Nobody is- well, I'm not saying nobody but people don't get to communicate, people don't get to get their ideas out, their thoughts their stories out there.

Althea Billings  8:25
Is there a time in your life where you've been able to express a story like that or you've seen someone express it and seen it make a difference?

Lâm Quãng  8:33
Well, you know, that's a good question. Because I, like I don't know if I said I don't care, but I do. I mean, I care enough to want to get these stories out there. I know it matters. Enough of those stories, get out there and people do feel it and I- I know there's a lot of very heavy stuff goes on right now to, to the media to, especially a younger kids are speaking out and the environment, the atrocity that goes on. And we as adults need to be able to stand up and speak out as well because the future doesn't look that good to us right now. I mean, all the know, the global warming the, the fire going on in Australia and all the trash that we put out to the world. It's kind of- it's- it's pretty troublesome. We- we- we have to stand up and speak out.

Althea Billings  10:01
And those stories give you a better understanding for that, do you think?

Lâm Quãng  10:04
Oh, indeed, I think so. Stories, I mean, as humanity, stories were all we have and story makes- has always been get together, has always been how we relate information to each others is through stories. And it's fascinating when a story is told well. I want to use humor, I want to use pain. I want to use examples to really make this experience more graphic. And to get these points across, it's really important to us.

Althea Billings  10:54
Yeah, well, Lâm, is there anything else you'd like to impart to our listeners today?

Lâm Quãng  11:00
Yes, the show that I'm doing is on Saturday the 15th at Headwaters studio theatre, and it's a sliding scale. I wish it was free, but we have to pay for expenses and all that. So it's returning $10 to $25 on a sliding scale. So yeah, so that's, I hope people get to come and see and experience what a good story nonetheless. It's at eight o'clock the doors open at seven.

Althea Billings  11:41
Well, thank you so much for being here with us.