The Long and Twisted Tale of Jordan Cove 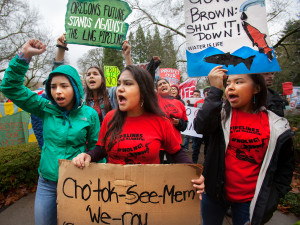 For several years we have been following the long and twisted tale of the Jordan Cove LNG export facility proposed for Coos Bay and its companion Pacific Connector Gas Pipeline, which would snake across much of Southern Oregon, carrying fracked gas to Jordan Cove. In the past year the struggle to stop this project has heated up and is starting to receive national and international attention. On January 21, the Oregon Department of State Lands (DSL) rejected Jordan Cove’s latest request for an extension on their removal/fill permit application, required before the project can proceed. DSL announced that they would make a final decision on the permit by January 31. Fearing a denial, two days later Jordan Cove withdrew their permit application.

This week on Locus Focus we are rebroadcasting Part Two of the radio documentary HOLDING THE THIN GREEN LINE, produced by Barbara Bernstein this past fall. This segment on the campaign to stop Jordan Cove has been updated since its initial broadcast, to reflect some recent developments which are raising hopes that the project will be defeated sooner than later.

"The Long and Twisted Tale of Jordan Cove," tells the story of what could be the largest Liquid Natural Gas (LNG) export terminal on the West Coast. This mammoth facility, proposed for Coos Bay, Oregon, would be fed by a 240 mile long, 36″ wide pipeline transporting fracked gas across four counties in Southern Oregon. It would cross much of Southern Oregon, disturbing 480 rivers, streams and wetlands in its wake. For fifteen years community members, landowners and indigenous people have organized and raised their voices to stop this assault on their homes, communities and land. This documentary depicts this struggle and the amazing resistance it has spawned.

Update Required To play the media you will need to either update your browser to a recent version or update your Flash plugin.
Download audio file
Topic tags:
Activism, Community Building, Energy/Natural Resources, Environment/Climate, Indigenous